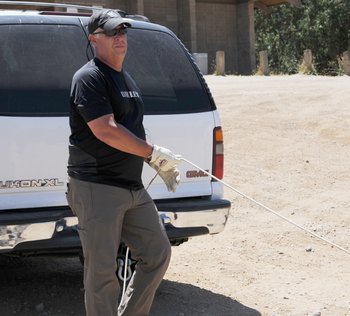 In 2004 Mr. Barnack was selected for a special counter terrorism project in Baghdad, Iraq. Mr. Barnack was part of the Crisis Response Team a DOD/DOS project of selected law enforcement professionals and elite military special operators. The team developed Iraq’s Emergency Response Unit. A Tier One, National Asset Program for the country of Iraq.

In 2005 Mr. Barnack was selected as a Team Leader for the Iraqi SWAT Project, which included course development, hiring/termination of instructors, translators and all equipment needed for a national SWAT Team. In addition oversaw the four week training program and lead instructor.

Mr. Barnack and some of his teammates were selected for a special project at the US Embassy, Kabul. Afghanistan. Anti-Terrorism/Counter-Terrorism; Subject Matter Experts, Instructors and Operations.

In 2006 Mr. Barnack was selected as a Special Criminal Investigator for the DOD in the JIEDDO – Joint IED Defeat Organization. I was assigned to Baghdad, Iraq, where I collected intelligence, conducted field operations, conducted raids and conducted sensitive site exploration. In addition to conducting numerous raids, but Mr. Barnack was involved numerous combat patrols in Baghdad.

Injuries in Iraq meant Mr. Barnack was no longer deployable.

In 2010 NASBLA hired Mr. Barnack and Tactical Training Solutions, Inc as a contract instructor for the maritime courses they were launching. NASBLA is a major client.